It’s safe to say that dealing with anger – both acknowledged and repressed – is not something that’s unique to me. I think it’s a common underlying issue for many Americans.

By no means is it something that only plagues Americans, but we seem to have a particular flavor that is interesting.

Let’s take a broader view of American culture from the perspective of the rest of Western society.

When compared to other Western nations, comparatively the U.S. is by far the most conservative, for better and / or for worse. Political liberals in the U.S. would be considered conservatives elsewhere.

I am not labeling this as positive or negative. I mention it because the roots of American society lie – in large part but not in total – with several radically conservative religious and secular groups, and when a person or group moves to one extreme of a spectrum (be it liberal, conservative, or whatever), there is far more emotional involvement included.

And where emotions run high so, too, does the propensity for hurt feelings, misunderstanding and, ultimately, anger.

That being my thesis statement, per se, the following is the evidence.

In 1989, three professors (Mark A. Noll from Wheaton College, George Marsden from Duke, and Nathan O. Hatch from Notre Dame) wrote a book titled The Search for Christian America. Their goal was to analyze the historical legitimacy of the oft-heard claim from super-conservative Christian circles that states in a variety of ways, “America’s gone all wrong because it’s departed from its Christian heritage and needs to turn back to God!”

The authors reach an interesting conclusion that meshes well with the historical facts and explains much of the impetus that drove the colonies to rebel against England.

The broad, stereotypical picture of the major groups that colonized and influenced the culture of the colonies is: the Puritans (and Pilgrims – pious and self-disciplined English religious groups) in the New England region; the Quakers (another pious and self-disciplined English religious group) in the Mid-Atlantic region; and several varieties of entrepreneurs and businessmen seeking to make fortunes in the South.

Interspersed among these groups were several Dutch Reformed and German Moravian Christians, a shamefully enslaved and culturally marginalized African community, as well as a large segment of Scott-Irish immigrants in the South.

All of these Christian groups were to varying extremes minorities in their land of origin seeking greater freedom to express their particular view of Christianity.

These sects also tended to push the envelope in the radical observance direction. They had specific ideas for the kinds of societies they wanted to establish in the colonies, and they were incredibly motivated to protect them.

This is also true of the numerous entrepreneurs at the time (and typical of any given time): those who are experiencing success tend to want to maintain the status quo, because it is through the status quo that they were able to gain success.

By definition, this is conservative. Conservative ideology is – broadly – a belief in maintaining the status quo of a society or, when change is necessary, only changing at a deliberately slow and thought-out pace.

Add to this conservative dynamic the political history of the Puritans in England.

Puritans had been heavily involved in the struggles between King and Parliament from the 1640s to the 1660s, trying to curb the power of the monarchy.

Through the experience of struggling to maintain the traditional liberties of the British heritage “against” the monarchy, the Puritans began to oppose what they saw as illegitimate concentrations of power, wherever those may be found.

It’s not difficult to see which direction this tradition would evolve when given the opportunity to govern itself while being subject to authorities thousands of miles away.

Combine these factors with extreme religious piety; the angst of several other immigrants against the English monarchy; the stresses of frontier living; constant belligerence against Native Americans (and a recent conflict with the French in Canada during the French and Indian Wars); and an entrepreneurial class all too interested in keeping its money and making more…you can see the writing on the wall.

The conflicting perceptions leading up to the American Revolution from both the British and American perspectives as described in The Search for Christian America are telling:

“‘In English eyes the revenue question [initiating the Stamp Tax] was simple. The British debt [from the French and Indian War] was staggering; the American debt insignificant. Englishmen paid high taxes; Americans low taxes. Much of the British debt had been acquired defending the colonies from the French, and now the territory to guard and administer had been enlarged by the recent war. Therefore, tax revenues from the colonies must be increased.’ The Stamp Tax projected an annual revenue of 100,000 pounds; the English debt had grown by approximately 130,000,000 pounds during the war…To Americans…however, the Stamp Tax was something else entirely. The important thing for colonists was not the war debt, but Britain’s power. If Parliament could impose a tax (even a small one) on the colonies without the colonists’ consent, what would stop Parliament if it wished to take more and more of their property? Perhaps the arbitrary power of Parliament would reach out even to the colonists themselves, after having devoured their property.”

The perspective offered by some Continental European immigrants provides a more unbiased view:

“…other recent immigrants from the European continent – where real persecution and tyranny often prevailed – questioned their fellow Americans about their rabid attitudes to Britain at the time of the Revolution. Why, they asked, are the patriots so excited about small mistakes of the Crown, when the American situation is (comparatively speaking) so much better than on the continent in Europe? Patriots could only reply that they knew better. They could see that a tax on tea was the tip of an iceberg masking a crushing tyranny heading straight for America. They could tell that the effort to liberalize British rule over Quebec was really a secret effort to oppress Protestant North America. The reason they could know these things was because they shared the Enlightenment confidence…that the ways of the world in politics could be read as clearly as the words of God in the Bible. They were mistaken. And in making this mistake they sacrificed an essential Christian confidence in the sovereignty of God over the structures of the world for a belief in the sovereignty of their own ability to discern the secret workings of the political world in which they found themselves.”

In general, the cultural climate of the American colonies spread the ideals of being self-made and self-reliant (be it through religious piety; economic advancement; moral-rightness; or governing powers); of being suspicious of any and all groups or individuals who would claim to exert power over others (“suspicious” may be judicious; “paranoid” might be more accurate); of emotionally-charged fervor over personal beliefs and experiences; and of being incredibly reactionary to any perceived threat.

In a word: radical. And where there is radicalism, anger is tagging along for the ride. 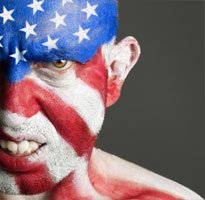 Does this still apply to American culture today?