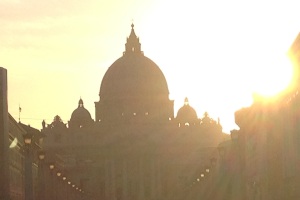 It’s no secret that the Church is a mess.

It has been from the beginning.  The New Testament is largely composed of letters Paul wrote to churches addressing several problems they were experiencing.

Anyone who has been a member of an organization knows they are difficult to maintain: people disagree with each other often.

There’s an inherent challenge for the Christian, though, and that is in attempting to corporately live out Jesus’ desire that the Church be one.

Paul likewise exhorts churches to strive for unity; to put aside petty differences for the sake of staying together.

As evidenced by the existence of thousands of Christian denominations and theological opinions, though, we have failed miserably.

Is there any hope that the countless Christian factions might find common ground this side of Christ’s return?

I think there is, but the process of making that hope reality will require humility and sacrifice on every Christian’s part.

I was raised as a Protestant and continue as one in the Anglican tradition, but I have long loved and respected the diversity of Christian traditions.

I recently returned from an amazing trip to Rome which included a visit to Vatican City, the heart of Roman Catholicism.

I have several dear friends who are Catholic and, lover of Church history that I am, I have flirted with becoming Catholic on several occasions.  It was thus with great reverence that I visited St. Peter’s Basilica in the Vatican, one of the holiest sites in Christendom.

I felt God’s presence powerfully in that church and was humbled much as the Hobbit Pippin was by the great halls of Minas Tirith in Tolkien’s Return of the King – so many great men and women of faith that had imbued that space with holiness for hundreds of years combined with the grand architecture to remind me of the glory of God and the long tradition of which I am an incredibly small part.

In many respects I agree with Catholic and Orthodox Christians who lay claim to being “The” Church, as being the inheritors of the institution Christ began.

What, then, prevents me from converting to either venerable church?

It is the deeper commitment I have to the only concept of the Church that can truly be one in the ways Paul instructs.

“Accept him whose faith is weak, without passing judgment on disputable matters…One man considers one day more sacred than another; another man considers every day alike.  Each one should be fully convinced in his own mind…make up your mind not to put any stumbling block or obstacle in your brother’s way…Let us therefore make every effort to do what leads to peace and to mutual edification…We who are strong ought to bear with the failings of the weak and not to please ourselves” (selections from Romans 14 and 15).

“I appeal to you, brothers, in the name of our Lord Jesus Christ, that all of you agree with one another so that there may be no divisions among you and that you may be perfectly united in mind and thought…Knowledge puffs up, but love builds up.  The man who thinks he knows something does not yet know as he ought to know…Be careful that the exercise of your freedom does not become a stumbling block to the weak.  For if anyone with a weak conscience sees you who have this knowledge eating in an idol’s temple, won’t he be emboldened to eat what has been sacrificed to idols?  So this weak brother, for whom Christ died, is destroyed by your knowledge.  When you sin against your brothers in this way and wound their weak conscience, you sin against Christ” (selections from 1 Corinthians 1 and 8).

Paul exhorts Christians to think more highly of each other than themselves; to be more concerned about causing a crisis of belief or conscience in someone else than in freely expressing their own personal beliefs in disputable matters.

Defining what matters are “disputable,” of course, is incredibly difficult and subject to wildly divergent opinions.

I love Church tradition and orthodox doctrine, but the trouble with each in the Catholic and Orthodox Churches is that virtually nothing is considered disputable – all matters of tradition and doctrine have no room for divergence. 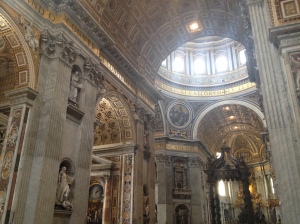 That is not in keeping with what Paul taught.

According to the teachings of Catholicism and Orthodoxy, it is incredibly likely that many heroes of the faith in the New Testament and Early Church would now be considered heretics – so many teachings that evolved over hundreds of years represent ideas that would have been light years removed from consideration by Christians for the first several hundred years of the Church’s existence.

The likelihood is incredibly small that every single saint cared about or would have agreed with every single doctrine that became orthodox in the Church hundreds of years after his or her life.

Catholics and Orthodox have erected walls that need to come down for unity to be attained.

Conversely, Protestants have gone insane in abusing the freedom Paul clearly commanded not to abuse.

Protestants have been compromised by the Spirit of the Age of the Enlightenment, trusting what they deem to be true in their own eyes more than in the collective wisdom of the many saints that have gone before.

In light of this, Paul’s teaching is requisite: humility.  Those Christians who seek unity must come together in humility for many discussions, not holding on to the sanctity of their own traditions with a death grip, but looking to the edification and bolstering of their brother’s and sister’s faiths.

It means that we must not cling to what we consider to be our own rights but must instead look to humbly do what is necessary to help the faith of others.

It means that we must humbly pray and discuss what we consider to be core, indispensable doctrine and what can ultimately be deemed as disputable.

It means that we “do nothing out of selfish ambition or vain conceit.  Rather, in humility [we] value others above [our]selves” (Philippians 2:3).