What’s really missing in society is the ability for people who disagree to understand and empathize with each other.

We vilify.  We see this happening not only at the interpersonal level but at the corporate, political and international levels, as well.

We identify an enemy and we attack, frankly because it’s the easiest thing to do.

Seldom does this result in anyone truly “winning.”  Cases in point:

How’s that War on Terror going?  Seems the more people the West kill, the more terrorists there are to take their place.  Maybe because the West is not focusing on addressing the root issues of the problems surrounding why terrorists feel this is their only recourse.

How’s the national debt resolving?  Oh, it’d be great if those Republicans would agree to increase taxes.  Or those Democrats agreed to reign in entitlement spending.

No one wins when sides are polarized because either a stalemate or a tyranny result: a stare-down where nothing is accomplished or the imposition of imperial-like policy on a significant segment of the population.

The cure to polarization is empathy in which opposing sides are able to understand and sympathize with each other even if they end up not agreeing.  This ought to result in not only compassion towards those we disagree with but also far more benevolent discourse and – ultimately – governance.

There are few contemporary Western issues that cause more vitriol and confusion than the legal debate regarding same-sex marriage.  Right or wrong, the perception often is that this pits Christians on one side versus everyone else on the other.

This is such an incredibly delicate topic.  The blunt truth is, if you identify as homosexual and feel like you are being oppressed or are the victim of hate and prejudice, that is terrible and wrong.

It’s because so many people have indeed been victims of hatred that this issue is emotionally loaded.  Lord knows it isn’t my intention to offend or hurt anyone no matter what your opinion.

The service I hope to do is show the incredible number of nuances at play in the several different Christian perspectives regarding this issue so discourse might be more fruitful (and trust me when I say the inner dialogue between differing Christian approaches is quite possibly more volatile and hateful than any “secular” / “Christian” dialogue, to our shame).

I also want to be clear that I’m not interested in discussing whether anything should or shouldn’t be legal – that’s an entirely sort of different discussion as will now be explained.

There is no single Christian approach to the relationship between culture / government and the Christian him or herself.  There are several – often competing – visions.

Coloring all those visions, though, is the even broader American concept of the separation between Church and State.

As with basically all the Enlightenment philosophy that has more thoroughly dominated the foundations of our thoughts and feelings than any religion could have hoped to for over 300 years, I think it’s time we admitted the obvious truth: what a freaking mess. 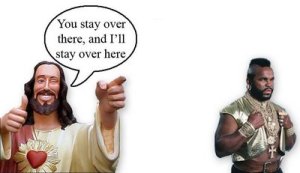 We are brainwashed into accepting the Enlightenment principles the U.S. was founded on as part of our socialization as if the principles were handed down by divine fiat from Valhalla, so let’s turn our lemming-like tendency against itself: who says every principle on which our Republic was founded is necessarily correct?

These “principles” have quite evidently become our national civil religion, so let’s separate that Church from our State while also admitting that the separation of Church and State was never actually part of the Constitution or any founding documents of authority (the prohibition against the establishment of a national Church most certainly was).

I’m not bringing this up to argue for the Church’s direct involvement in matters of the State, but only to call attention to the obvious reality that a person’s religious beliefs (be they even atheistic or agnostic) directly influence who that person is and how they will interact with others.

In other words, please admit that the idea that any nation’s government could not be influenced by religion (as defined as a system of belief) is laughable.  Humans are religious by nature, thus it is inevitable that religion will be integral to whatever government a society has.  The better question is: what religion(s) will a society be influenced by?

[Brief aside: some of the first posts on this blog concerned the makeup of the religion and people of the U.S. at its founding. The conclusion was that the U.S. has never been a “Christian” nation but one formed around Enlightenment ideals (influenced by versions of Christianity, no doubt) that more properly are identified as a culmination of deistic and Epicurean beliefs]

Which brings us back to the broad principle that Christians are not in consensus regarding what Christianity’s relationship to government and culture ought to be.

There are of course several types of Christians that each fall within several models of engagement (or disengagement) with government / culture.

Very basically, the modes are: 1) opposition to culture, 2) agreement with culture, 3) Christ above culture, which emphasizes essentially an apathetic regard for anything that is “of this world,” 4) tension with culture, in which a delicate balance is kept between the extremes of embracing worldly culture and estrangement from it, and 5) reformation of culture, where the Christian seeks to infuse Christianity directly into culture in order to alter it.

Then within these five modes fall the numerous different types of Christians, from the politically liberal and conservative to moderate.

Hopefully that helps illustrate a bit why there are so many Christian voices saying seemingly conflicting things in regard to any given topic.  There are a wide variety of opinions on whether Christian belief ought to have any influence at all on cultures and governments, ranging from those advocating complete control to those encouraging complete withdrawal.

Now, regarding sexuality, it’s quite important to note the issue ought not to be about homosexuality proper (though many Christians insist it is) but human sexuality in general.

And the even bigger issues beyond that are: what the Christian understands human identity to be and where the Christian decides God’s authority on Earth resides.

2 thoughts on “The disconnect with Christians on sexuality, Part I”