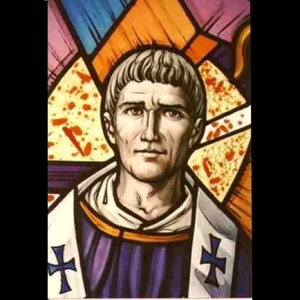 We’re talkin’ ’bout sex, ’cause you know that’s what you’re thinkin’ about.

Oh, yeah, Augustine, girl (or boy, as it were).  That sly dog.  The Church Father who puts the “hip” in Hippo.

Because, seriously, Augustine loved sex.  Yes, the single most influential church scholar other than St. Paul was likely a sex addict for much of his life.

At least, that’s the way he tells the story.  Augustine’s partial autobiography, “Confessions,” is a classic of both ancient literature and Christian theology.

As the title suggests, the book is written as a confession in the first person, Augustine writing to God about much of his early life before converting to Christianity at age 32.

St. Augustine of Hippo is rightly regarded as one of the most brilliant minds that ever lived.  He became Bishop of Hippo in North Africa, and his writings and teachings helped expand Christianity (for good or ill, depending on your perspective) into a more robust vision of living life.

Yet one of the most influential people in Christian (and world) history was – surprise – human.  His struggles and his thoughts are incredibly relevant to us 1,700 years later.

Augustine’s birthday was two days ago, November 13, 354 C.E.  His father, Patricius, wasn’t rich but was a leading figure in his birth city of Tagaste (modern Souk Ahras in Algeria).  While his father was a pagan, his mother, Monica, was a Christian, and Augustine received a Christian education.

But Augustine wasn’t a Christian.  He excelled in school, and his father made arrangements to send him to Carthage to study advanced rhetoric at age 16.

But, oh, those teenage years.  Augustine wrote in “Confessions” that it was when he was 16 that “the frenzy gripped me and I surrendered myself entirely to lust…floundering in the broiling sea of…fornication.”

He lived promiscuously at Carthage until he was 18 or 19.  He said that sex had become an obsession for him: “From a perverted act of will, desire had grown, and when desire is [satisfied], habit is forged; and when habit [is not resisted], a compulsive urge sets in.”

Soon after he settled down, per se, with a mistress who gave birth to a son, Adeodatus. 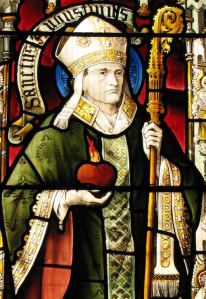 Augustine became professor of rhetoric in Milan, and his mother persuaded him to become engaged to a local girl from a reputable family.  The arrangement, however, required Augustine to be chaste for two years (until the girl was old enough to marry).

Augustine sent away his mistress in preparation for the engagement, but very quickly took another mistress.  “I thought it [the two years] should be too miserable unless folded in female arms,” he wrote.

In his late 20s and early 30s, Augustine began to become disenchanted with the Manichaean philosophy he had supported for over a decade.  He had been attracted to Manichaeism because of its promise to guide one to pure philosophic knowledge without need of faith and to offer a scientific explanation of nature (that sounds rather contemporary, no?).

After immersing himself in Manichaean learning, though, he began to conclude they had nothing constructive to offer.  “They destroy everything and build up nothing,” he wrote (wait…isn’t that postmodernism to the “T”?).  He was appalled at their hypocrisy in giving lip service to loving virtues but in practice living completely immoral lives.

The final straw came when he met a leading Manichaean bishop, Faustus, and discovered that he, rather than offering actual science as a means of understanding reality, was nothing but another rhetorician disguising his verbal arguments as science (describes so much of what passes as the “New Atheist” movement today).

Augustine abandoned Manichaeism and turned in succession to several other philosophies, notably neo-Platonism, which gave him hope that he might be able to lead a life devoted to searching for truth and aspiring to virtue.

Yet, he could not escape the pull of his passions.

While Augustine had begun to meet with the Christian Bishop of Milan, Ambrose, he did not convert until he had what he understood to be an encounter with God.  According to Augustine, he heard a childlike voice tell him to “Take up and read” the Bible, which he interpreted as being a divine command to read the first thing he turned to in scripture.

As chance or God would have it, he turned to Romans 13 and read the following (CEV translation): “So behave properly, as people do in the day. Don’t go to wild parties or get drunk or be vulgar or indecent. Don’t quarrel or be jealous.  Let the Lord Jesus Christ be as near to you as the clothes you wear. Then you won’t try to satisfy your selfish desires.”

Though not the only factor, this was a defining experience in Augustine’s Christian conversion.  Even still, while his mind began to be convinced regarding the truth of Christianity, his struggles with sex continued, as demonstrated by his famously conflicted prayer: “Give me chastity and continence…but not yet.”

Eventually, Augustine indeed found his peace in Christ, which gives me hope.  The well-known introduction to his “Confessions” states: “You have made us for Yourself, oh Lord, and our hearts are restless until they find rest in You.”

That such a brilliant and influential man could struggle so mightily with the same things I and so many of us struggle with is encouraging.  While it’s quite likely that Augustine overcompensated for his promiscuity in his later writings on sex (to be discussed more fully later), he nonetheless provided numerous insights and explanations about Christianity, philosophy and politics that were centuries ahead of his contemporaries and in many ways have remained unmatched in 1,700 years.

It’s humbling and affirming to be able to relate with Augustine when he confesses: “I became evil for no reason.  I had no motive for my wickedness except wickedness itself.  It was foul, and I loved it.  I loved the self-destruction, I loved my fall, not the object for which I had fallen but my fall itself.”

“Sin is looking for the right thing in the wrong place,” Augustine wrote.  He also stated “There is no Saint without a past, no sinner without a future.”

Don’t give up.  Keep wrestling.

2 thoughts on “Sexcapades with St. Augustine”