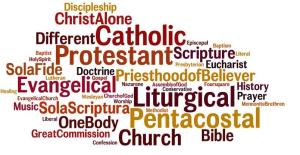 Within the broad spectrum of religious belief that is the Christian community, there is a movement to brush aside theological differences over “minor details” and focus on our similarities.

For the most part, I fully support this endeavour.  I am an advocate of ecumenism, which is the pursuit of reuniting the many varieties of Christianity once more as one Church.

But at the same time I am beginning to see the dangers inherent in ignoring minor details.  Because, first of all, we tend to disagree on what is actually minor to begin with.  And secondly, maybe the things we’ve thought were minor actually are a whole lot more important than we realize.

That doesn’t mean I advocate increasing division.  It means I think we need to appreciate why we believe the things we do and what the ramifications are for those beliefs.  We can still respect those we disagree with, but let’s not be ignorant of what our beliefs mean for how our lives are lived.

At this point those of you not well-versed in the intricacies of various Christian traditions may wonder what some of the things are that Christians disagree on.  It’s a massive list, but some of the more well-known issues from off the top of my head are: the nature of salvation (by faith, by grace, with works?); importance and ways of baptizing; the processes of justification and sanctification; the meaning and substance of Communion; liturgical versus non-liturgical worship structure; etc.

These differences don’t even touch on far more controversial issues like whether some groups who claim to be Christian may in fact be Christian, such as Mormons and (as claimed by some heavily Reformed Protestant elements) Roman Catholics, which could be a big deal as far as Christian salvation is concerned. 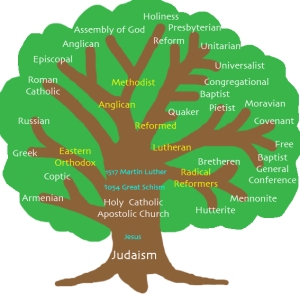 In addressing what “defines” a person as a Christian, I find a helpful rubric to be the standard established by the Christian Church in the 300s A.D. for that exact purpose: the Creeds.

From its beginnings Christianity has had a variety of interpretations.  In the pages of the New Testament we read Paul lecturing the churches he helped found about remaining committed to the version of the Gospel he taught – as given to him by Christ and affirmed by the Apostles – and no other.

A variety of heresies (beliefs at variance with the standard) contended with orthodoxy during Christianity’s first 300 years, culminating in the epic clash with Arianism that was the catalyst for the calling of the great councils where the Creeds were established.

The Nicene, Apostles’ and Athanasian Creeds are all variations on the same theme of establishing the bedrock foundation of orthodox Christian belief as explained in Scripture and initially interpreted by the Apostles.

If one differs with the statements given in the Creeds, then one is not properly understood as an orthodox Christian.  If a particular Christian practice or belief isn’t listed in the Creeds, then it is not considered a foundational point of contention (Christians may disagree with one another and still consider each other as Christian).

I believe in one God the Father Almighty, Maker of heaven and earth, And of all things visible and invisible: And in one Lord Jesus Christ, the only-begotten Son of God; Begotten of his Father before all worlds, God of God, Light of Light, Very God of very God; Begotten, not made; Being of one substance with the Father; By whom all things were made: Who for us men and for our salvation came down from heaven, And was incarnate by the Holy Ghost of the Virgin Mary, And was made man: And was crucified also for us under Pontius Pilate; He suffered and was buried: And the third day he rose again according to the Scriptures: And ascended into heaven, And sitteth on the right hand of the Father: And he shall come again, with glory, to judge both the quick and the dead; Whose kingdom shall have no end.

And I believe in the Holy Ghost, The Lord, and Giver of Life, Who proceedeth from the Father and the Son; Who with the Father and the Son together is worshiped and glorified; Who spake by the Prophets: And I believe one Catholic and Apostolic Church: I acknowledge one Baptism for the remission of sins: And I look for the Resurrection of the dead: And the Life of the world to come. Amen.

The Creeds are a great starting place for establishing the foundation of Christian belief.  But what, exactly, do these statements in the Creeds mean?  And how are we to understand the Christian depiction of reality stemming from the Creeds and from the words of Scripture?

7 thoughts on “Variety of Christianities – Do differences matter?”