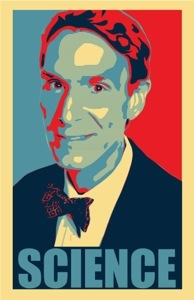 In middle school I became fascinated with time travel. I wrote a series of research papers each year from 6th through 9th grades that began with time travel as the premise but ended with my best efforts as a 14-year-old in analyzing the most recent quantum physics theories regarding the natures of time, space, and reality.

I read the standard pulp theoretical physics fare like “Hyperspace” by Michio Kaku to “A Brief History of Time” by Stephen Hawking, then ventured into more technical tomes such as “Black Holes and Time Warps: Einstein’s Outrageous Legacy” by Caltech Professor of Theoretical Physics Kip Thorne.

In high school, I became immersed in Evolutionary Theory, pouring over the details of natural selection, species adaptation, and the commonalities shared at the genetic level across known life. My reading selections ranged from “The Selfish Gene” by Richard Dawkins to “Ever Since Darwin” by Stephen J. Gould.

I fell in love with science fiction, particularly the sub-genre called “hard science fiction,” which incorporates actual scientific theory into fictional stories to create possible future worlds. I particularly liked anything by Isaac Asimov, the “Mars Trilogy” by Kim Stanley Robinson, and the “Xeelee Sequence” by Stephen Baxter.

An interesting thing kept striking me in my science readings, and I became quite familiar with the opposite end of its spectrum as a result of growing up in a Protestant Christian environment in rural North Florida during the 1990s: many scientists seemed motivated to turn the interpretation of their findings into a religion, while the religious seemed motivated to redefine science.

You know the story, I’m sure – because you don’t live under a rock – and I have no interest in rehashing it. Suffice to say, in particular regarding evolution (but it also comes up in other sciences), many scientists want to use the field for the non-scientific purpose of debunking God’s existence, while many religious people (American Protestant Christians in particular) want to discredit much accepted science.

I’ve been there, done that, got the T-shirt, and have since burned it.

Here’s the skinny: people – regardless of who we are, what we believe, how we think, whatever – rely on interpretation to create meaning for our experiences.

The classic cliche is the glass with water at the midpoint – is it half-empty of half-full? The actual fact is the glass is at half-capacity. Interpretation is how we answer the question, “What does that fact mean?”

For the sake of sanity and brevity, we’ll leave the philosophical discussion at that level (one can easily call up Descartes – or “The Matrix,” if you prefer – and ask “What is real? What is fact?” but we’ve traversed there a bit already, and it goes beyond the scope of what science defines as reality).

Everybody interprets and creates meaning. Even if you conclude life as a whole has “no meaning,” that in itself acts as your meaning: your metanarrative, to use a postmodern phrase.

Everyone does this, some to greater and lesser extents, but this is how we live our lives. For whatever reasons, we humans are meaning-makers.

What science is, in its pure form, is a process of acquiring knowledge about physical reality through a structured method. But this science only exists in the realm of the hypothetical, because pure objectivity (observing something with no hint of interpretational bias) is impossible.

Some will disagree at first, because a valid argument could be raised stating, “There is nothing biased about wtinessing ‘A’ cominbe with ‘B’ and produce ‘C,'” and that in itself is true enough.

But bias still informs this process, because (ultimately) the motivation for choosing to observe “A, B, C” came because the scientist observing it wants to know something, has some form of vested interest in the outcome of the observation (be it grant money, prestige, tenure, peer respect, etc.), and chose to observe “A, B, C” at the expense of observing “X, Y, Z.”

What we too often read and hear from scientists is the expression of their interpretations and metanarratives masquerading as science, whether implicitly or explicitly. On the flip side, what we too often see from several Christians is an attempt to co-opt science to serve preconceived notions, which neuters what science actual is.

We know numerous things in life apart from a scientific method of obtaining information. We know whom we love, not because we started with a hypothesis and followed steps 1 through 10 to reach a conclusion, but out of some hodge-podge of intangible and often unquantifiable reasons. We know how to ride a bike through a version of apprenticing and through trial and error, not testing and speculating.

It is within the last 300 years, though, that modern scientific knowledge has demonstrated itself to be far more tangibly powerful than any other form of knowledge. The advances of technology by leaps and bounds and the shear increase in mastery over so much of nature give scientific knowledge, by appearance, the ultimate trump card: airplanes, rockets, medicine, computers, smart phones, tablets – faster, smarter, more efficient, better.

In the realm of human knowledge, science is Goliath. And instinctively, at a base level, all of us seem to hold that might equals right. Disagree with science? HA! Here’s a nuclear bomb. 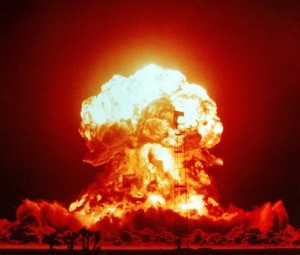 Noooo…science is still trying to figure out how life likely began but is fairly confident that life has evolved into different forms of life over millions of years. Science says nothing about what that means. People do.

HA! Science says there has to have been some sort of Creator because the universe began with a Big Bang; nothing physical, then, BANG! Energy and matter!

Noooo…science currently accepts the physical universe did indeed begin with the sudden appearance of a singularity, but as scientific law applies only to nature as we can observe and test it, we can not know with certainty the rules (if there are any) outside our universe (though we do speculate). Science says nothing about what that means. People do.

The battle most people have is not with science itself; it’s with the people who want to either make science do what it can’t do (provide meaning) or who are not clear in separating their particular interpretations of scientific results from the results themselves.

So by all means, let’s have our debates about what scientific findings and theories mean, but let’s not try to bludgeon each other as if any of us speaks with the “authority” of science.

And let’s understand that debating the meaning of anything ultimately leads us to philosophy.

But there is no escape even in philosophy from the influence of our interpretational biases, though people do from time to time change their opinions.

One thought on “Science!”