What does it mean to worship? The root of the word “worship” is “worth,” so the most basic meaning of worship is to ascribe worth to something.

We all think some ideal, some person, or some thing has a kind of ultimate worth, and in a variety of different ways we demonstrate our opinions regarding what we think is worthy – it’s thus a basic human characteristic to be a worshiper.

When we worship something we elevate its importance. A thing in itself can be good, bad, or neutral, but when we worship it (invest ultimate importance in it), we magnify whatever qualities it possesses.

I think the foundation of the civil religion of America and the West is a worship of the ideal of freedom. Atheist, Christian, Buddhist, Muslim, Hindu, Democrat, Republican, Communist, Socialist, whatever – freedom permeates every religion, every worldview, every philosophy, every mindset of our culture and our heritage in the West.

Perhaps more broadly we worship our rights as humans, but primary among those rights is a particular notion of freedom.

And I think this Gospel of Freedom is destroying us as individuals and as a society.

That doesn’t mean I think freedom is bad – I think it’s incredibly important. Vital. But it is not supposed to be an object of worship, and when it is treated as such, it (like all things that weren’t meant to be worshiped) has its limitations distorted and intensified.

There’s also this fact: the particular understanding of freedom we worship is not the only understanding there is. Freedom is an idea; as such, it’s open to debate about what, exactly, it really is.

Let’s take a look at a critique of the dominant modernist version of freedom, observe several of the problems that result, then look at an alternative concept of freedom.

The first comments come from a book by my undergraduate professor in political theory at the University of Florida, Leslie Paul Thiele. The book is Thinking Politics: Perspectives in Ancient, Modern and Postmodern Political Theory.

“As with much that we value in life, we have to ask of liberty whether there can be too much of a good thing. “At its best, the valorization of personal liberty is the noblest achievement of Western civilization,” sociologist Orlando Patterson writes. Yet he goes on to observe that “at its worst, no value has been more evil and socially corrosive in its consequences, inducing selfishness, alienation, the celebration of greed, and the dehumanizing disregard for the ‘losers,’ the little people who fail to make it.’ Does too much liberty present a threat to political community? What limits, if any, should be placed on our freedom?…Liberty should be understood as freedom to adopt appropriate limits, rather than as freedom from all limits. According to [British political thinker Edmund] Burke, we are qualified to exercise liberty in exact proportion to our disposition and capacity to restrain our own appetites. [pgs. 163-165]

“…rules limiting the exercise of our linguistic freedom do so in order to make such freedom meaningful in the first place. One cannot truly exercise one’s freedom of speech…if another speaker simultaneously chooses to exercise his freedom of speech in a much louder voice. Freedom of speech means more than the right to speak; it includes the right to be heard…In order to be heard, others must, at least temporarily, restrict their own freedom to speak…We often think of liberty as the ability to flout rules, as the right to do whatever one cares to do, heedless of others. Yet such abstract liberty has little political merit or application because it is impossible for a people to share. Freedom of speech, like all freedoms, can be misused. Liberty is a potentially dangerous thing. Since the time of Plato political theorists have taken on the task of determining exactly how much liberty is beneficial, and when, how, and where it should be limited. The problem is made particularly troublesome because the word liberty means different things to different people at different times. [German philosopher Georg] Hegel himself found the concept of liberty to be “indefinite, ambiguous, and open to the greatest misconceptions.” [pg. 166] 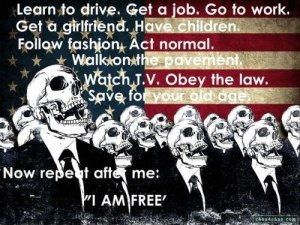 Philosopher James K. A. Smith presents a comparison between our currently accepted model of freedom as opposed to an alternative model attributed to St. Augustine of Hippo. Smith’s essay is, “The Gospel of Freedom, or Another Gospel? Theology, Empire, and American Foreign Policy” as included in the book Evangelicals and Empire: Christian Alternatives to the Political Status Quo, edited by Bruce Ellis Benson and Peter Goodwin Heltzel:

“In the history of philosophy and theology, there have been two dominant, and competing, concepts of freedom. One is a “libertarian” understanding of freedom that equates freedom with freedom of choice or the power to do otherwise…To be free is to have (a) options to choose and (b) the ability to choose, uncoerced and unrestrained, among these options…Any specified telos [ultimate end or purpose] for human[s]…would constitute a restraint on legitimate options and therefore a restriction of freedom…To be free, then, is equated with a state of autosovereignty, with respect to both the power to choose and the freedom to determine one’s own good…This conception of freedom has become so dominant that it is almost impossible for us to think of freedom otherwise…it fosters the proliferation of choices without any valuation. [pgs. 80-81]

“However, there remains another option: rejecting [this idea of freedom] and reinscribing freedom as “participatory.” Augustine articulated this alternative account of freedom not as libertarian freedom of choice (which he linked to sin) but rather as positive freedom for the Good…To be free is to be empowered and enabled to choose the Good…David Burrell has articulated a maxim of [Augustine’s understanding of freedom]…[which] directly counters the most common modern intuitions, viz., that in order for there to be freedom, there must be no relations of dependence or external forces that might impinge upon the “free” agent…Modernity erected a philosophical account of freedom that…conceived of freedom on wholly immanent grounds…freedom now becomes a “power” that resides self-sufficiently in autonomous human[s]. [pgs. 81-83]

“By seeking to locate all “power” of “choosing” internal to the human…the modern libertarian subject mimics or even replaces a free creator, or at least exhibits all the characteristics of a free creator…[in this model] the human will is a…self-starter; it moves itself. But this allusion…misconstrues Aristotle…[the human will is envisaged] as a “prime mover” because [it] “presumes Aristotle’s prime mover to be an initiator, a ‘pusher.'” But…”a prime mover requires that it be unmoved and that it cause whatever moves to move by being the object of desire.” In this respect, the prime mover is a puller, not a pusher…It is a mover by allure, not pressure. And this “erotic” account of human freedom…does a better job of honoring the complexities of human choosings…Unlike [libertarian freedom], which reduces human beings to “mere ‘choice-machines,'” [Augustinian freedom]…recognizes that “our choosings are always embedded in a rich texture of desires.” [pgs. 83-84]

“God “makes me” will something not by pushing but by pulling. “And if I cannot be pushed to will something, but only drawn to do so, not even God can cause me to do something freely…Yet God, as my sovereign good, could so draw my will as to bring me freely to consent to the end for which my nature craves. So freedom is less a question of self-determination…than it is one of attuning oneself to one’s ultimate end.” …On this account, humans are not self-starters but “responders”; freedom, then, is less a matter of “choosing” and more a matter of “accepting” a gift or “consenting” to the in-built orientation of one’s being…[Augustinian freedom] sees the freedom of indifference as a failure to be properly free. The indifferent agent has averted her orientation to the Good, which is both the source and the goal of proper freedom. “Refusing such a good is tantamount to denying our nature,” and such refusal of the Good “leads one toward enslavement by lesser goods.”” [pgs. 84-86]

In other words, freedom is properly understood as acceptance rather than choosing. Freedom does not reside in the ability to make unlimited choices but rather in acceptance of reality and what our identity is.

Are we free when we understand and embrace who we truly are as people, or when we feed ourselves with an endless supply of options and choices?

Instead of considering the merits and shortcomings of this version of freedom, we have allowed our culture to convince us that libertarian freedom is the only actual kind of freedom there is, and that is a lie.

Our cultural worship of libertarian freedom has hijacked our understanding of human identity; our ability to engage in successful and meaningful dialogue with those we fundamentally disagree with; our sense of a deep and pervasive morality that is transcultural while still being produced by specific cultures; has encouraged us down the road of rampant consumerism and exploitation; and has drastically shifted our focus away from the immanence of what we are confronted with in everyday life into a nebulous realm of philosophizing and theorizing that has little positive influence on actual (not solely intellectual) life.

This concept of freedom is a wolf in sheep’s clothing. It is a tyrant keeping us separated from real freedom and clouding our minds so that we can’t clearly see who we as humans truly are.

Supposedly we in the West are quite adept at dealing with tyrants. Perhaps we should begin treating abstract philosophical tyrants in the same way we treat political ones.

2 thoughts on “Tyranny of the “Gospel of Freedom” – ending our civil religion, Part II”