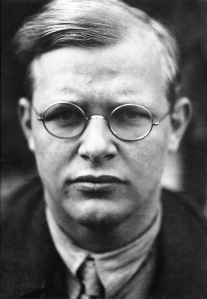 I am writing this post for myself because it relates to my own struggles.  It will be a happy coincidence if it applies to anyone else, but I suspect it may, as we’re not really all that different.

One of my favorite theologians is Dietrich Bonhoeffer, a relatively famous Christian commonly known for his tangential affiliation with the Valkyrie plot to assassinate Hitler in 1944 which resulted in his execution by the Nazi state not long before the end of the Second World War.

About a year ago I read a terrific biography by Eric Metaxas called Bonhoeffer: Pastor, Martyr, Prophet, Spy.  I must sadly admit that this is largely the extent of my familiarity with Bonhoeffer’s theological work as I have not directly read any of his books to date.

One of the core distinctions in this book is between what Bonhoeffer calls “cheap” and “costly” grace.

In contrast, “Costly grace confronts us as a gracious call to follow Jesus, it comes as a word of forgiveness to the broken spirit and the contrite heart. It is costly because it compels a man to submit to the yoke of Christ and follow him; it is grace because Jesus says: ‘My yoke is easy and my burden is light.'”

I quote Bonhoeffer because I have recently and independently come to a similar conclusion about Christianity and remembered that Bonhoeffer came to them first 80 years ago (credit where credit is due).

It is hard to be a Christian.

I mean this as a lifelong commitment, not a moment in time.  We all have emotional highs and lows, and during the high parts when grace seems to flow abundantly and freely, relatively speaking it is quite easy to be a Christian.

But during the valleys of life it can be incredibly difficult.  Depending on the depths of those valleys and the amount of time they last, Christians can and do sometimes lose their faith.  By that I am not making a comment on “losing” salvation or not, but stating the temporal fact that those who identified as Christians sometimes stop doing so.

This is a hard reality and one that is not easy or popular to write about.  Having grown up in a Christian home and environment, it is not something that is actually ever discussed, that I can recall.  Perhaps much to our detriment as our silence on the matter can implicitly suggest to those who are struggling that their struggles in faith are not normative.

When I suggest that being a Christian is difficult, I mean actually being a Christian.  That means someone who is attempting to actively live out a life in submission to Christ, while of course allowing for continued struggles with various sins and mistakes (which is also not typically mentioned enough: it’s OK to struggle with sin; we all do).

This is sadly in contrast to many people who consider themselves to be Christian because they intellectually believe certain doctrines but in actuality are not disciples of Christ.

Ouch.  Allow me to unpack that, if you will.

Go back to Bonhoeffer: cheap grace – forgiveness without repentance; baptism without discipline; Communion without confession.  I dare suggest this is where the majority of Americans who identify as Christian actually are.  They believe in their heads, but they are still the gods of their own lives.

Don’t get me wrong: we all struggle with this.  We all grab control of our lives back from God from time to time.  But many of us never actually make the attempt to submit ourselves to God to begin with.

To be a disciple of Christ is to live life differently than the rest of the world.  Cheap grace does not work; it isn’t really grace.  Costly grace is the only real grace, and it comes, as the name suggests, at a cost.

That cost is the death of your old self, of the way of life that we see everyone else living broadcast to us continuously through music, movies, radio, television, billboards, smart phone apps, internet ads, pornography, newspapers, downtown in cities, and a million other mediums.

To be a Christian is to determine to say “no” to “the world.”

It allows for mistakes and rebellions along the way.  It allows for us to continuously fall short and require our continued asking for more grace and forgiveness.  It allows for our realizing our complete and utter inadequacy in and of ourselves, our epiphany that we need a savior because we can’t do any of this stuff on our own, that the indwelling of the Holy Spirit is the only way we will ever have any successes – and those only through His power, His might, and His faithfulness.

And that default is only achieved through surrender to Him.  My letting go and allowing Him Lordship over my life, allowing Him to remake it in His image according to His ways.

That is the personal meaning of the cross for the Christian.  We pick up our cross and follow Him, which is a daily (hourly) death to our ways and surrender to His ways.

I’ve shared before that a friend once told me so much of Paul’s letters in the New Testament can be summarized in one phrase: don’t give up.

Because we want to.  It’s hard.  The world seems like it’s having so much fun a lot of the time, and there is fun in much of what it does or else it wouldn’t do it.

But like the disciples in the Gospels, we Christians realize deep down that not only is the way of the world ultimately meaningless, but that it leads to death.  Death in a thousand different ways – to love, to life, to freedom, to truth, to dignity, to honor, to loyalty, to faith, to hope.

“Are you going to leave me, too?” Jesus asks the Twelve after many of those following Him left after He gave a hard lesson on eating His body and drinking His blood.

Peter answered Him, “Where else would we go, Lord?  You have the words of life.”

And this is where the Christian, at the end of his struggles and the threat of loss of faith, returns – where else would I go?

The world offers some joy and fun that is fleeting and cheap, but I know deep down that it is death.  Other religions, other philosophies, they have some elements of truth and much wisdom, but they are not Truth, which is a Person.

Only one has the words that resonate deep inside us, in places that speak to our hearts, minds and souls.  Where else would we go, Lord?  We submit ourselves to you, warts and all, struggles and all, and ask for Your help in getting us through this race to the finish line.

That is the cost of being a Christian.

3 thoughts on “The cost of being a Christian”