I’ve mentioned in the past that I am an orthodox Christian, but I’ve neglected to explain why.

What do I mean by “orthodox Christian”?

Theologically I mean the vision of Christianity as explained in the Apostles’ and Nicene Creeds from the Fourth Century C.E.: the statements of belief that Roman Catholics, Eastern Orthodox, Anglicans, and several Protestant denominations adhere to.

[I think matters of theology (orthodoxy literally means “right belief”) are far more important for the Christian than how a particular church sets up its hierarchy of authority. First we’ll look at theology and then move to the less-critical aspect of orthodoxy, church (ecclesial) authority]

I think this tradition is historically accurate and reflects Jesus’ intention for His Church.

Good Christians disagree, but that’s my take and thesis statement.

Because the Christian’s primary source for theology is the Bible, how one understands the authority of Scripture essentially determines how one views Christianity.

There are several ideas concerning how the Bible ought to be perceived.

The typical conservative theological approach is to claim that it is “infallible” and “inerrant,” which means that it has no historical or factual errors; that by a method of “plain reading” (taking the words at face value), its teachings are self-evident.

The typical liberal theological approach is to claim that Scripture is riddled with inaccuracies and cultural stigmas, thus whatever authority it has must be determined by the individual Christian as he or she molds Scripture with contemporary understandings.

I reject both approaches: the conservative approach is too simple and ignores research while the liberal approach is too cynical and obsessed with the philosophical elevation of the self.

It’s obvious that the Bible is not inerrant in any technical sense of the term. Scripture never makes this claim. It is a philosophical, man-made construct of the 18th and 19th Centuries.

It’s also obvious that the underlying motivation for several Christians is far too often not submission to God but the glorification of the self (the intellect; what we want to believe; what image we want to make God).

Ultimately liberalism succumbs to the same temptation as the Enlightenment and Modernism: it places its faith and trust in human reason, a faith that has historically shown to be misplaced.

Being a theological and historical groupie of N.T. Wright (I haven’t found comparable work of like quality on the history and theology of Jesus, Paul, and the New Testament Church), it’s no surprise I agree with his take on the authority of Scripture: it rests in the heart of the story it presents – the narrative – as interpreted by the Apostles, as best as we can discern.

The Bible tells the story of God’s interaction with humanity and in the process spells out a particular way of understanding who God and humanity are.

Ultimately, all authority rests with God Himself – Scripture (and anything else) only has whatever authority God delegates it, and per Scripture itself, said authority is “teaching, rebuking, correcting and training in righteousness.” (2 Timothy 3:16)

That being said, we would be tossed about by the blowing of the cultural wind (as many are) if we relied only on ourselves to define what the grand narrative of the Bible actually is.

Much is made of how revolutionary and novel Jesus’ interpretation and teaching of the nature of Israel and the Torah were.

Many Christians take that as license for themselves (as followers of Jesus) to similarly revolutionize Christian belief through what they think is the prompting of the Holy Spirit.

First, according to Wright and others, while some of Jesus’ teaching was indeed unique, a good bit likely was not: there were a diversity of Jewish interpretations of their historical situation, and several began to suspect that perhaps the culmination of Israel’s story would be embodied in the person of the Messiah.

Second and more importantly, if Jesus was indeed divine, then as the incarnate version of God His interpretations don’t qualify as revolutionary: they are God’s perspective all along.

If He is the embodiment of God, whatever way He interprets is the way the story should have always been understood.

Jesus as God has the right to lay out His definitions. While Christians believe Christ dwells in us through the Holy Spirit, that does not grant us the same authoritative powers as God.

True, our comprehension of what has been taught can be altered through the work of the Holy Spirit (reference Acts 15), but where does the authority properly rest in “officially recognizing” when the Spirit is trying to change our perceptions?

It rests with the same entity that Jesus directly passed His authority to and which also provides the proper understanding of the grand narrative of Scripture: the Church.

By “the Church” I mean the consensus testimony of all orthodox saints for over 2,000 years and the inheritors of their authority today (yes, it “sounds Catholic.” It pretty much is, though I recognize saints in all branches of Christianity).

This is a massive point of departure for several Christians, but here’s the justification, whether you buy it or not (and many don’t):

As broken, messed up, lamentable, and shameful as the universal Church has frequently been, it’s structured (where it is episcopal) in the way Jesus and the Apostles intended in order to pass down their teaching.

In other words, one can see historically how bishops, priests, deacons and deaconesses became the inheritors (in a one-on-one discipling method – i.e., John discipled Ignatius, then Ignatius discipled Polycarp, etc.) of the understanding of what the Apostles believed Christianity is.

It’s true that in the New Testament Church the breaking down of social walls within the community was integral as Paul attests; that Christians viewed each other as brothers and sisters in Christ; and that there was room for much freedom and movement of the Spirit during worship.

Yet it is also true that Paul was concerned that worship be orderly and structured (as spelled out in his first letter to the Corinthian Church) and that there was a hierarchical authority system in place in the church from the beginning.

Three brief examples of said hierarchy are witnessed in the Book of Acts.

In Acts 1 the Apostles found it necessary (per Peter’s quotation of the Psalm that “another [should] take his place of leadership”) that they replace Judas Iscariot as one of “the Twelve.”

In Acts 6 the Twelve were becoming overburdened with tasks in the growing Christian community and said, “It would not be right for us to neglect the ministry of the word of God in order to wait on tables [I know, sounds condescending]. Brothers and sisters, choose seven men from among you who are known to be full of the Spirit and wisdom. We will turn this responsibility over to them and will give our attention to prayer and the ministry of the word.” (Acts 6:2-4)

In Acts 15 Paul and Barnabas are appointed by the Church in Antioch as representatives to present a theological dispute to the “apostles and elders” in Jerusalem for resolution (appealing to authority). After discussion with this group in Jerusalem, James (a brother of Jesus and the leader of the Church in Jerusalem) states, “It is my judgment, therefore, that we should not make it difficult for the Gentiles who are turning to God.” The narrative moves away from this scene at that point, and we are thus left to assume that James’ judgment represents the authoritative word for the Church.

Surely the “offices” of bishop and presbyter evolved as the decades went by, but they were adapted by the men and women who were directly discipled by the Apostles themselves.

How likely is it that those discipled by the Apostles would radically shift their intention for the Church?

This is important because the Church has always believed that the way to know who Jesus is and understand Scripture is to do so as the Apostles did.

And the Apostles deigned to pass down their understanding to those they appointed to follow them as leaders of the Church.

The canon of the New Testament comes from this tradition, as does the eventual doctrine of the Trinity and the formation of the Creeds.

This is important because the combination of theological and ecclesial orthodoxy proved decisive in defining Christianity at least once. 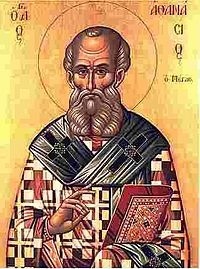 The Arian Controversy in the Fourth Century pitted the new and more popular theology of Arius (who claimed Jesus was not divine) versus the shrinking minority view held by Athanasius (supporting the standard doctrine of Jesus’ full humanity and divinity).

The Arians had fantastic theology. They could point to Scriptures that certainly appeared to support their positions when viewed within the rubric they were using. It makes logical sense to assume that whatever begets something else (in this case, the Father begetting the Son) is in some sense greater than that which is begotten. And the majority of leaders in the Church (and Emperor Constantine) were coming on board with this view.

Yet over several decades of struggle, Arianism was eventually defeated and orthodoxy prevailed, primarily through Athanasius’ ability to convincingly demonstrate that – regardless of what Arianism had in its favor – his view was in fact the deposit of the Christian faith as taught and believed by the Apostles; Arianism was not.

And what the Apostles taught – those who walked and talked with Jesus and on which the foundations of the Church are laid – is Christianity.

I support that view. Whatever Jesus taught and however it was understood by those He trusted to establish His Church – that’s what I want to believe.

Surely the Church has undergone much turmoil and has not perfectly passed on – in its life or its doctrine – that which it was entrusted with, but what group of people could?

We do the best we can, trusting in God to lead us and sustain us as we try to remain true to who He is and what He has revealed.